Who said City of Light? Delve deep into the mysterious tunnels under the French capital and discover its dark side on this guided tour of the Paris Catacombs. 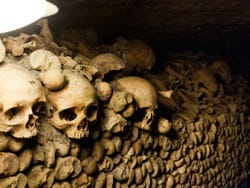 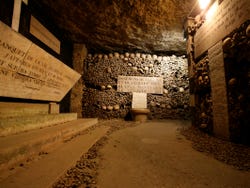 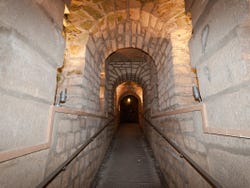 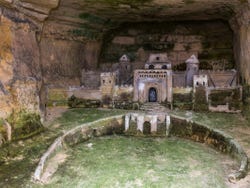 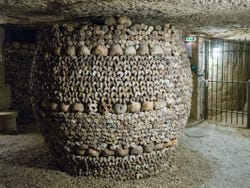 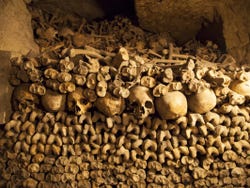 After meeting your guide in Place Denfert-Rochereau, you'll enter the spooky shadows of one of the most famous cemeteries in the French capital: the Catacombs of Paris. The labyrinthine tunnel system, a former stone quarry which stretches for an astounding 186 miles (300 km) under the city, is home to the remains of almost 2 million people - did we already say this visit isn't for the faint hearted? The bones were moved here in the late 18th century after the overcrowded necropolises began to collapse... a gruesome image!

Having climbed deep into the damp and dark underground mausoleum, hidden 65 feet (20 m) below the romantic Parisian streets, you'll be met with an inscription in French warning you that "this is the Empire of Death"... enter if you dare!

Inside, you'll embark on a guided tour through the ossuary, exploring the narrow passageways lined with skulls and decorated with bones. This tour will also give you exclusive access to areas not usually open to tourists, specifically to the rock carvings of Décure, a quarry worker from the 18th century, including a sculpture of the Port Mahon prison on Menorca, where he was imprisoned as a soldier.

Discover the pool in which the quarrymen would wash after their day's work, and admire the Sacellum crypt and the sepulchral lamp, which was often used to test if there was enough oxygen in the tunnel network. And of course, you'll visit one of very few graves to be identified by name, the sarcophagus of the poet Nicholas Gilbert.

Following your guided visit of the Catacombs of Paris, you'll emerge back into daylight and your tour will come to an end in Rue Rémy Dumoncel, several streets away from your start point.

This guided tour includes skip the line access to the Catacombs of Paris, so you'll avoid the lengthy queues to get into the fascinating attraction.

All of our providers comply with local legislation and applicable health recommendations regarding protective material and safety to help avoid the spread of Covid-19.

* The price varies based on the chosen date

You can book up until 12 hours before the activity as long as there are still places. Book now to guarantee your spot.

No, not suitable for people with reduced mobility.

Do you have any questions?

Find answers to our most If you have any other questions please contact us.

from
US$ 95.30
No hidden fees or surcharges
Free cancellation up to 3 days before
Book

Free! Free cancellation up to 3 days before the day of the activity. If you cancel under this time or do not show up, you will not be refunded.

Laura is one of the best guides that has touched us! Very nice, telling stories, she cares about everyone and you can see that she is passionate about it. We were delighted with the tour! It was totally worth going to the catacombs. As a guide I recommend it 100%. Opinion translated. Show original.

Dinner Cruise on the Seine

8.70 / 10 609 reviews
Admire Paris’s monuments lit up while you savor a gourmet dinner on a panoramic Seine cruise. An unforgettable experience and a great way to discover Paris.
US$ 90.50
Book
like

Lunch Cruise on the Seine

9.20 / 10 119 reviews
Enjoy a delectable 3-course meal and admire the panoramic views of Paris from the Seine. The perfect way to discover this romantic city.
US$ 59.10
Book
like

10 / 10 1 review
This guided tour of the Eiffel tower is one of the best ways to discover its secrets and enjoy some spectacular views of Paris. Get to know the symbol of the 'City of Light'.
US$ 43.40
Book