The T+ ticket gives you access to the following means of transport: 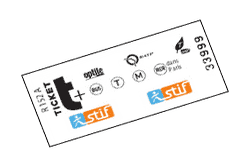 With the t+ ticket, travellers will be able to travel on the Metro and the RER express train (zone 1), or connect a bus line with another bus line or with any tram (except T4).

However, travellers won’t be able to change from the metro to the bus or use the same bus line twice using the t+ ticket.

Where to Purchase the t+ Ticket?

The t+ tickets can be bought individually or as a book of 10 tickets in the ticket vending machines in the Metro stations and RER railway stations or on any bus or tram.

It is possible to purchase a t+ ticket directly from the bus driver. However, it costs € 0.20 (US$ 0.20) more and you won't be able to change means of transport with the same ticket.

* Children under 10 years old can benefit from the reduced rate.