The Île Saint-Louis was not inhabited, like its neighboring Île de la Cité, until the seventeenth century, when a carefully drafted plan of the island was designed and mapped and still conserved to this day. Before this, the island had been used as land for cattle grazing and as a lumberyard.

When the island was planned out, it was populated by the wealthiest residents of Paris, who took advantage of the haven of peace and tranquillity to build their mansions and small palaces.

Smaller and cosier than its neighboring Île de la Cité, the Île Saint-Louis is a perfect place to discover by foot, strolling down its narrow streets exploring its unique atmosphere, porches and façades.

Most of the island is residential, but there are several restaurants offering a variety of French cuisine, hotels and small shops with beautifully decorated window displays that are worth visiting. 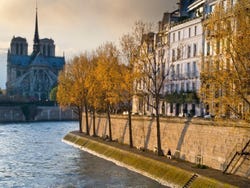 In the city center, next to Île de la Cité