The first church built on this site began in 1764. However, after the death of the architect in 1777, his successor decided to bring the whole building down, designing a completely different temple. When the Revolution broke out, the construction was paralysed whilst they decided what to do with the church.

The second attempt was also demolished and Napoleon I assigned a new architect to build an edifice based on the design of an ancient temple in honour of the French Navy.

With the fall of Napoleón, the building was made into a church in 1842, in honour of St Mary Magdalene.

La Madeleine is extremely striking from the outside due to its neoclassical façade, which is very similar to an ancient Greek temple. The building has 52 Corinthian columns standing 65 ft (20 m) tall, giving the building a majestic aspect. On the pediment there is a high relief that represents the last judgement.

The interior of the church, which is very dimly lit, is made up of a single nave with three domes that are not visible from the outside. Above the High Alter stands a statue of St Mary Magdalene, whilst in the dome above the statue there is a fresco relating the history of Christianism.

It is worthwhile taking a close look at the organ, which is considered one of the best in Paris.

Madeleine Church is truly stunning, specially its façade. The interior of the temple is also distinct from the other places of worship built during the same period as it is dimly lit with very few decorative elements giving it a special feel. 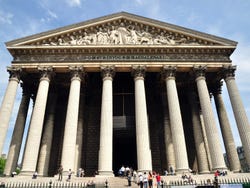 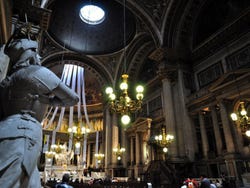 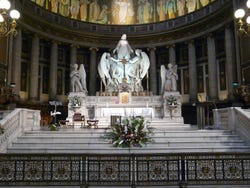 Place de la Madeleine, at the end of Rue Royale.