Located in the Palais Garnier, the Opéra Garnier is an impressive Neo-Baroque building that together with the Bastille Opéra makes up the Paris Opera. This buildinginspired the famous novel by Gastón Leroux, The Phantom of the Opera.

After Napoleon III's decision to design a new building for the opera, a contest was organized in which over 170 architects submitted their projects. Subsequently, the young architect Charles Garnier was selected to carry out the construction of the new concert hall.

Before the building was finished, Napoleon decided to make an avenue connecting Palais Garnier with Palais des Tuileries. To achieve this, thousands of families were evicted and their houses demolished. Curiously, the Emperor never used this avenue even when it was finished.

The construction began in 1860 and wasn't finished until 1875 due to several complications like the war of 1870 or the fall of the Second French Empire.

Finally, after the intricate work of 14 painters, craftsmen and 73 sculptors, the Palais Garnier was opened in 1875. Unreasonably, the architect of the project, Garnier, was not even invited to the inauguration for having had contact with Napoleon. To access the music hall, he had to buy an admission ticket and see it as any other Parisian.

During the visit to the Palais Garnier, it is possible to see the extravagance and opulence of the building.

One of the most impressive parts of the Opéra is the Grand Foyer, with gold leafing and stunning mosaics, where the spectators would chat with others during the intermission.

The Auditorium, decorated in red and gold tones, is illuminated by a large chandelier that lights up the lively and colourful ceiling, created by Marc Chagall. The Auditorium can only seat 1,900, which is small if we compare it to the size of the whole Opera.

Probably one of the most noteworthy elements of the building is the white marble Grand staircase with a balustrade of red and green marble.

The Palais Garnier is a remarkable building that transmits the past’s opulence and elegance.

Visitors can either visit the Opera with a tour guide or by themselves. The guided tours last 90 minutes, so you might prefer to visit the building by yourself if you don't have much time to spare. 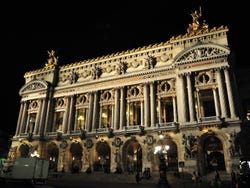 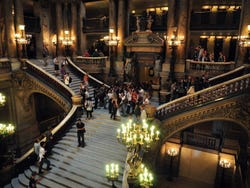 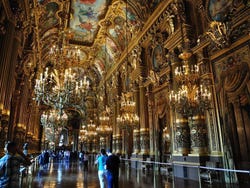