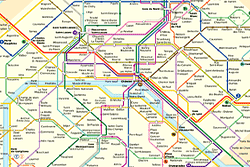 The first line of the Paris Metro opened on 19 July, 1900, and connected Porte de Vincennes with Porte Maillot. Since then, the subway has grown gradually, inaugurating the last line in 1998. This line is considered one of the most modern worldwide. Currently, Paris Metro has 303 lines and is 136 miles (219 km) long.

The Metro signage is usually a letter M, or the words Métro or Métropolitain. The lines are numbered 1 to 14, and there are two additional lines called 3bis and 7bis.

To get around the centre of Paris the Metro connects perfectly with the RER trains. Passengers can use the same travel card and the difference between the underground and train is barely noticeable. This guide includes a map of both the Metro and RER lines.

The Underground runs until 2 am on Friday and Saturday.

There are different types of transport tickets: the single-journey called T+ Ticket, and the weekly or monthly travel cards: Paris Visite and Passe Navigo.

The subway line in Paris is the third-longest line in Europe after London and Madrid. It has over 300 stations and 136 miles of tracks.

It is said that there is no part of Paris that doesn’t have a metro station 500 meters (1640 feet) away or less.

Other Types of Transport

The Metro is not the only way to get around Paris: click here to see the other transport options available to you. 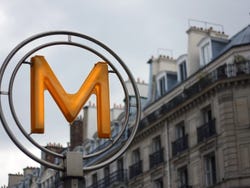