The area was named "Quartier Latin" during the Middle Ages, when the students of the University La Sorbonne, inhabitants of this neighborhood, used Latin as the language of study.

Since the Middle Ages and up to the present day, students living in the Latin Quarter have had a huge influence on the rest of the city. During the nineteenth and twentieth century, students organized movements of great political importance such as the revolt of May 1968, a general strike that nearly brought down the French government of the time.

After crossing Place de Saint Michel, where there is a towering fountain of Saint Michael fighting a dragon, you enter a maze of small and charming streets that make up the Quartier Latin.  These streets are full of reasonably-priced restaurants and cafés with terraces. Although there are several streets offering good restaurants, the main artery is Rue Huchette, and always a good option. 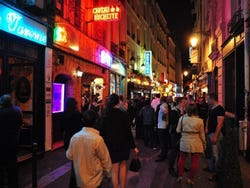 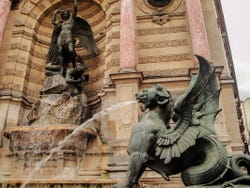