Charles de Gaulle (CDG) is the major international airport in Paris and the second largest in numbers of passengers in Europe after Heathrow Airport (London). In 2019, over 76 million passengers flew from its terminals. It is also known as Roissy - Charles de Gaulle.

Charles de Gaulle Airport has three terminals and the second one has several interconnected lobbies. A light-rail shuttle links these three terminals (except hall 2G) and is free.

Getting to Paris from Charles de Gaulle

The easiest and most relaxing way to get to the city centre is booking an airport transfer service. The driver of the car will be waiting for you at the arrival terminal with a sign with your name on it and will take you to your hotel in the shortest possible time.

The line B of the RER train (Paris’ express train) connects Charles de Gaulle Airport with the city centre in half an hour. The most important stops include Gare de Nord (25 minutes), Châtelet-Les-Halles (28 minutes), and Denfert-Rochereau (35 minutes). A train leaves the airport every 10 – 15 minutes.

A single-journey from Charles de Gaulle to Paris costs € 10 (US$ 11) (zones 1-5). This ticket is also valid if you need to take the metro (subway) from one of the train stations to get to your hotel.

The Roissybus stops at all the airport terminals (except 2G) before heading to the city centre, dropping its passengers off at rue Scribe at the corner of rue Auber.

We recommend this bus for those who are staying close to Place de l’Opéra and can get to their hotel by foot from the bus station.

Two local buses connect this airport with the city centre:

Both buses take over an hour to get to Paris and they leave the airport every 15 – 35 minutes.

Air France offers several routes to the city centre and to Orly airport. The price is quite high (€ 17 (US$ 18.70)) and not really worth it.

Are you going to Disneyland? 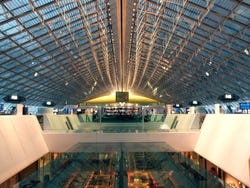 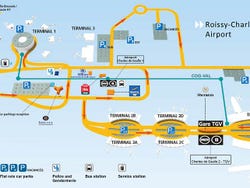 Getting to Paris Orly Airport 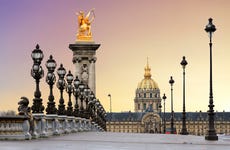