The origins of the Champs-Élysées can be traced to 1640 when space was cleared to plant a line of trees, which would later become an avenue. The name translates to “Elysian Fields” from the Greek mythology, meaning resting place of Greek gods and dead heroes, similar to the Christian paradise.

In 1724, the avenue was extended and acquired its current size and in 1994 the city renovated the street’s sidewalks, improving the Champs-Élysées considerably. Nowadays, its buildings are high-end stores, cafés and offices, ideal for shopping or going for a stroll down one of the most beautiful avenues of the city.

The Champs-Élysées is also renowned worldwide, especially among sports fans, as it is the site of the Tour de France’s last stage.

A walk down the Champs-Élysées

The avenue is divided in two. The lower part, closest to the Place de la Concorde, runs through a park with imposing buildings such as the Palais de la Découverte (Discovery Palace), the Petit Palais and the Grand Palais.

The Champs-Élysées ends at the opposite side of the Arc de Triomphe, where the avenue de la Grande Armée leads to the Grande Arche de la Défense and the district of La Défense.

From the Grande Arche, visitors have an amazing view of Champs-Élysées. 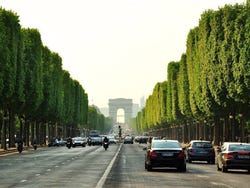 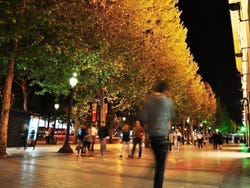 Night life in the Champs-Élysées 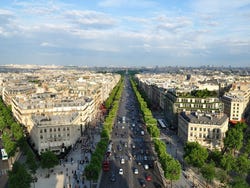 Between the Arc de Triomphe and Place de la Concorde.