The Place de la Concorde is the second largest square in France after the Place des Quinconces in Bordeaux.

This square was designed between 1757 and 1779 and named Place Louis XV. In the center there was an equestrian statue of the King Louis XV, made to celebrate his better health after having suffered a long illness.

In 1792 the statue was torn down and melted and the square was renamed Place de la Révolution (Revolution square). During the French Revolution, this square was the chosen location for the public beheadings by guillotine of over 1,200 people. Some of the most famous figures guillotined were Queen Marie Antoinette, King Louis XVI or Maximilien Robespierre.

When this bloodthirsty period ended in 1795, the square was baptized Place de la Concorde.

The Place de la Concorde was renovated between 1836 and 1840 when a giant 3,000-years-old Egyptian obelisk from Luxor, offered by the Khedive of Egypt, was placed in the center of the square.

Aligned with the obelisk there are two river and sea-themed fountains influenced by the fountains of Rome.

The north side of the square is closed with the buildings of the French Naval Ministry and the Crillon Hotel, one of the oldest and most elegant hotels in Paris.

From the obelisk, the views of Paris are breath-taking. On one side, you see the Tuileries Garden with the Louvre Museum in the background, and on the other side, you see the Champs-Élysées and the Arc de Triomphe. 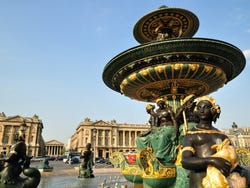 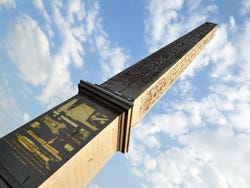 Between Champs-Élysées and the Tuileries Garden