Originally, the Champs de Mars was where the Parisians grew their vegetables and fruit. When the École Militaire (Military School) was built on the southeast side of the park, the land was used for military drills. The name Champs de Mars comes from that period, honouring Mars, the Roman war god.

This open area has witnessed important events, such as different Revolutionary acts or the 1791 massacre.

It has also housed the famous world fairs which were organized in Paris, such as the Exposition Universelle of 1867, 1878 and 1889. And it was close observor of the Tour Eiffel, which would become the symbol of the city.

Behind the École Militaire is UNESCO’s famous headquarters.

Ideal for a Picnic

Champs de Mars is currently a favourite spot for both Parisians and tourists to sit and relax, go for a walk or enjoy a picnic whilst enjoying the views of the impressive Eiffel Tower monument on the northwest side of the park. 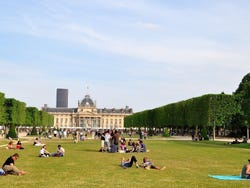 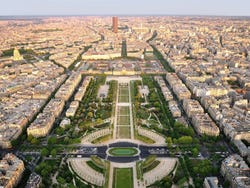 At the foot of the Eiffel Tower