The Sainte-Chapelle (Holy Chapel) is a gothic style church built between 1242 and 1248 to house the relics of the Passion of Christ, made up of the Crown of Thorns and a piece of Santa Cruz. It is located on the Île de la Cité.

Having bought the Sacred Relics from the Emperors of Constantinople, Louis IX managed to increase the city’s worldwide prestige, making Paris the second Christian capital in the world. The relics were three times more expensive than the construction of the Sainte-Chapelle.

The temple is made up of two floors; only the King and his entourage had access to the top floor chapel and this is where the relics were kept. The first floor chapel was the place of worship of the Palace personnel, a discreet and sombre chapel.

During the French Revolution the Sainte-Chapelle suffered heavy damage. However, the magnificent stained glass windows survived as these were removed and placed in huge filing cabinets, which kept them intact.

Despite having been built as a reliquary, the church currently no longer holds any of the relics of the Passion of Christ. The remaining relics that survived the Revolution were moved to Notre Dame Cathedral’s treasury.

The upper chapel was built as a reliquary. It was decorated lavishly with sculptures and enormous stained glass that fill the chapel with light and colour.

The fifteen stained glass windows, which leave just enough room for the chapel’s columns, are made of 1,113 scenes that narrate the history of mankind from Genesis to the resurrection of Christ.

The lower chapel is a lot more discreet than the upper chapel. It holds the statue of the Virgin Mary, patron of this sanctuary. The interior polychrome decoration, which is mostly red and blue, recreates the original medieval decoration.

The eastern apse still preserves a fresco of the Annunciation made during the thirteenth century, which is the oldest mural in the city.

Although the Sainte-Chapelle doesn’t compare to the Cathedral of  Notre Dame, this church is a gothic style gem and is considered a masterpiece of 13th-century architecture. Its stained glass is unique and a definite must-see. 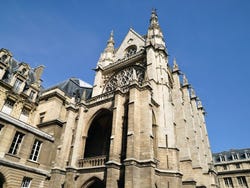 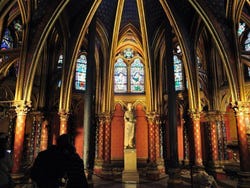 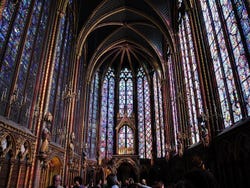 The famous 1113 scenes of the Sainte Chapelle
3See photo gallery 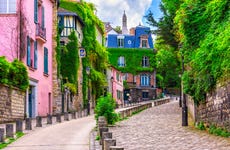 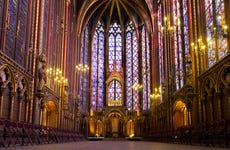