The RER also complements the Paris Metro, giving Parisians and tourists a larger transport network in the centre of Paris. The RER also connects the city centre with Charles de Gaulle Airport, Disneyland and Versailles. 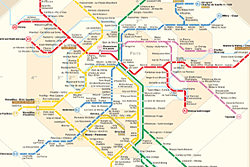 This express train has five lines (A, B, C, D and E), over 250 stations and runs over 365 miles of track. The most popular lines for tourists are A, B and C.

How to use the RER

The RER is very similar to the Paris Metro. However, there are two important things to keep in mind:

The schedules and timetables of the Paris RER depend on the different lines. Here are a few examples of the first and last Paris RER trains to popular destinations:

The fares of Paris RER depend on the journey’s distance. If you move within zone 1, the price and the ticket are the same as a single-ride metro ticket. You can change means of transport as many times as you want during the 90-minute validity of the ticket.

If you’re going to Charles de Gaulle, Versailles, Disneyland or other further away destinations, you have to buy a ticket for that specific zone. In the Paris RER ticket vending machines you can choose your destination and it will tell you the price.

To get around the city centre there are several travel cards to choose from: a single journey ticket (t+ ticket), or weekly and monthly travel cards: Paris Visite and Passe Navigo.

The RER has less stops and is a lot faster than the Paris Metro. Therefore, it is more convenient to take the express train for longer distances. A 30-minute metro ride can take 10 minutes if you get a RER train. 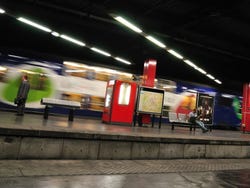 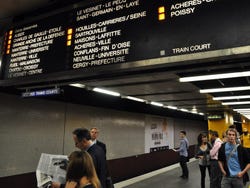