This is a list of the most stunning and interesting bridges:

Pont Alexandre III (Bridge Alexander III) is the most fascinating bridge in Paris. The overpass, opened for the Exposition Universelle (World Exhibition) of 1900 in Paris, is located between L’Hôtel des Invalides and the Grand and Petit Palais.

The bridge is made from a single span steel arch, an incredible engineering masterpiece of the period.

The bridge’s decoration is simply spectacular thanks to its four 55 ft (17 m) columns, with golden winged horses in the top part in the opposite ends of the structure.

Beautiful black candelabrum, cherubs and other decorative elements make this bridge a stunning construction, chosen by many as the scenery of their wedding photos.

The Pont de l’Alma is not one of the most beautiful of Paris, neither is it the longest nor the first to be built. However, since its construction, the Parisians have used this bridge to measure the swelling of the river.

The Seine is measured using the statue of a zouave (a soldier of the infantry regiment in the French Army) carved in one of the bridges columns. During the flooding of 1910 the river reached the soldier’s shoulders.

Presently, tourists also come to see the Pont de l’Alma to visit the tunnel where Princess Diana was killed. In the upper part of the tunnel is the Liberty Flame, a monument with which the United States thanked France for the restoration of the Statue of Liberty. Many leave flowers in remembrance of Princess of Wales.

Pont Neuf is decorated with beautiful black candelabrum and over 300 sculpted masks. This bridge situated in the eastern part of Île de la Cité is one of the most charming arches of Paris.

Curiously, the Pont Neuf, which means New Bridge in English, is the oldest bridge in the city. Moreover, it is also the longest overpass, measuring over 760 ft (232 m) long.

Built between 1587 and 1607, it was the first stone bridge built in Paris. All the other previous bridges had been made out of wood.

After the bridge was finished, it was very applauded by the Parisians. It was the first bridge that crossed the whole Seine, connecting the two river’s banks and the western part of the Île de la Cité. Moreover, the first pavements for pedestrians were put in place and small observation decks on top of each column were built to enjoy the views of the city. 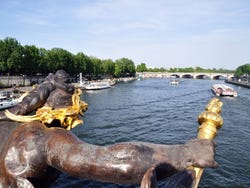 Views from the Pont Alexandre III 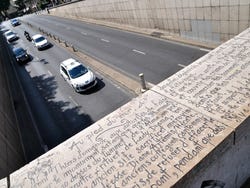 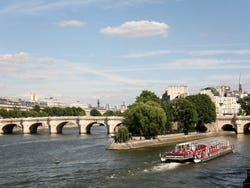 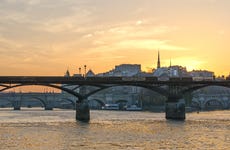 Lunch Cruise on the Seine 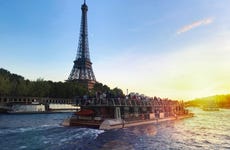