The climate in Paris is continental and therefore mild. The winters are generally cold but not freezing and the summers can be hot, although only occasionally. The rain is frequent with higher precipitations than London, occurring all year round.

Summers in Paris are very similar to those in London. From June to September, the average temperatures are minimum 55°F (13°C) and maximum 77°F (25°C). Sometimes it can get up to 86°F (30°C), but rarely. However, the heat in this city is humid and it can be oppressive to wander the streets of Paris during the hottest days.

The winters in the capital of France are cold, but not usually freezing. Average temperatures are minimum 33°F (1°C) and maximum 44°F (7°C). In winter, the rainfall is heavier and it can sometimes snow.

Paris is breath-taking all year round However, if we were to choose the best time to visit the city, we would pick the summer. During this period, it is less likely to rain and the days are longer. 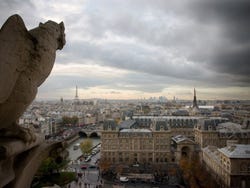