Commissioned by Catherine de Medici, the construction on the Tuileries Palace began in 1564, accompanied by a vast and magnificent Florentine garden. The palace and its gardens are named after the tile-making workshops called Tuileries, which had been located where the palace was built.

Here, Catherine de Medici organised palatial banquets and soirees for the high society in the Jardin des Tuileries, enclosed by high walls, among its fountains and sculptures.

When the French court was moved to the Château de Versailles, the palace and its gardens were abandoned and weren’t restored until the eighteenth century, when the enclosure was transformed inspired by typical English gardens. Later, Napoleón had the Arc de Triomphe du Carrousel made connecting the Tuileries Garden and the Louvre.

In 1870, the Tuileries Palace was burnt down by the Paris Commune. However, the garden survived and is nowadays one of the prettiest greenspaces to visit in Paris.

A Green Oasis in the Heart of the City

Nowadays, the Tuileries Garden is a public park where hundreds of Parisians and tourists can stroll down its paths, sunbathe and get away from the busy city life.

This park is a must-see. Visitors will greatly enjoy walking down its main tree-lined avenue with its many sculptures, surrounded by typical Parisian buildings.

Compared to other parks in Paris, the Tuileries Garden is highly recommended, not only because of its beautiful landscape but also because of its perfect location, between the Louvre Museum and the Place de la Concorde. 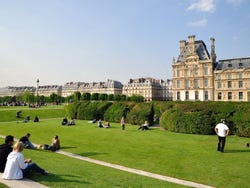 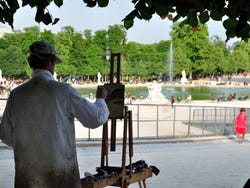 Painting in the Tuileries Garden 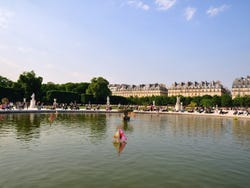 One of the Tuileries Garden fountains
3See photo gallery

Between the Louvre Museum and the Place de la Concorde