It is thought that the Catacombs hold the remains of over 6 million people buried along one of its 186 mi (300 km) tunnels.

History of the Catacombs

Before becoming Catacombs, these tunnels were used as a limestone quarry for a large amount of monuments and buildings that have become some of the city’s top attractions. During this period the tunnels were called Les Carrières de Paris (the quarries of Paris).

In 1786, to fight the epidemics and illnesses that were devastating the city’s population, the Government decided to move the corpses and skeletons of various cemeteries to the tunnels.

Although the visit to the Catacombs is quite a chilling experience, it is curious to see an infinite amount of human bones and skulls piled on top of each other forming vast constructions.

Despite the Catacombs being a top attraction in Paris, they are never crowded. 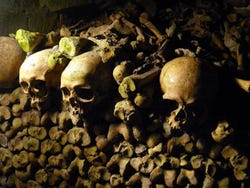 Entrance to the Catacombs in Paris 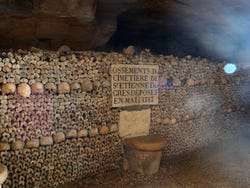 Discovering the ossuary in the Catacombs
2See photo gallery