The Eiffel Tower is a wrought iron tower that stands 1,063 ft (324 m) tall. It was designed for the Exposition Universelle, a world fair held in Paris in 1889. It is currently the most famous symbol of Paris.

Two senior engineers working for the architect and engineer Gustave Eiffel designed the Tower, which was then approved by Eiffel and proposed as the centerpiece for the world fair held in France’s capital, the Exposition Universelle in 1889. Once approved, 250 builders were hired to build the monument, which took over two years to finish.

Initially, the Eiffel Tower was the subject of controversy. The artists of the period thought the monument to be monstrous, and given its poor profitability, it was suggested on several occasions that they should demolish it.

During World War I, enemy messages were intercepted thanks to the tower radiotelegraphy center.

Currently, the Eiffel Tower is the most-visited monument in the world with over 7 million visitors a year. This is partly due to the popularity of Paris as a tourist destination.

If it’s your first time in Paris, going up the Eiffel Tower is a must. Visitors can choose to go up using the Tower lift or the stairs. However, before making your mind up on how you want to visit the monument, it's important to keep in mind that there are 1,665 steps to the top.

If you decide to take the stairs, you can only visit the second floor. Although the stairs admission ticket is cheaper, the difference is not worthwhile and we recommend taking the elevator.

The best moment to enjoy the breathtaking views of Paris is early in the morning to avoid the lines or at dusk, when visitors will see Paris lit up.

If you want to avoid the long lines at the Eiffel tower ticket office, the best option is to buy your tickets online. You can buy tickets via the official website or reserve our guided tour which also lets you skip the queues: 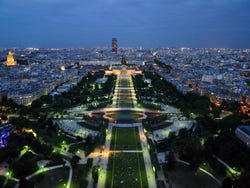 Views from the top of the Eiffel Tower 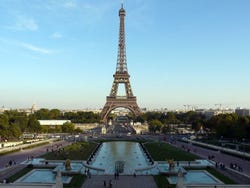 View of the Eiffel Tower from the Trocadero
2See photo gallery 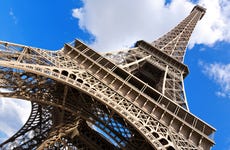 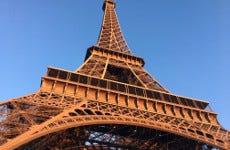