The Panthéon was the first major monument in Paris. It was built before the Arc de Triomphe and the Eiffel Tower, and was the first building that offered a panoramic view over France’s capital. It is located in the Latin Quarter, very close to the Jardin du Luxembourg.

The Panthéon was built between 1764 and 1790, firstly designed by Jacques Germain Soufflot and later by Jean Baptiste Rondelet. The Panthéon was created with the intention of combining the simplicity of the gothic architecture with the stateliness of the Greek architecture.

During the nineteenth century and depending on the political regime, the Panthéon was either used as a religious or as a patriotic building.

In the time of the Third Republic and coinciding with Victor Hugo’s funeral, the Panthéon’s necropolis was used to bury famous French citizens.

The visit of this landmark can be divided into two. Firstly, the interior of the mausoleum, where visitors will be rendered speechless by its sheer size and decoration, and secondly the crypt, that contains the tombs of illustrious French citizens such as Voltaire, Rousseau, Victor Hugo, Marie Curie, Louis Braille, Jean Monnet and Alejandro Dumas.

The Panthéon is a must-see attraction. Its neoclassical façade and its impressive interior are both very worth visiting. 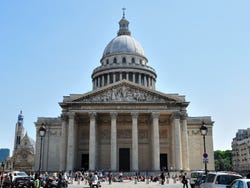 The Panthéon, a striking building 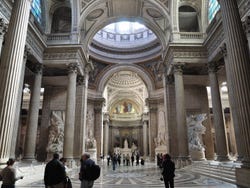 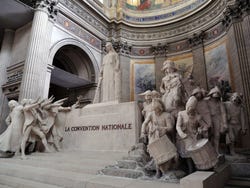 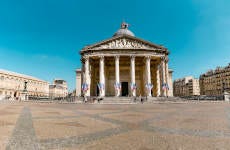