It is comparable to museums such as the MoMA in New York City or the Tate Modern in London.

Opened in 1977 in one of the oldest neighborhoods of Paris, the Centre Pompidou was a pioneering contemporary architectural masterpiece. Its brightly coloured tubes on the building’s façade contrast with the grey constructions around it.

Apart from the Musée National d’Art Moderne (National Museum of Modern Art), the Pompidou houses a Public Information Library and a music and acoustic research centre.

The building has six floors, each measuring 7,500 square meters. The permanent collections of the Musée National d’Art Moderne can be found on the fourth and fifth floor.

The fifth floor is entirely dedicated to Modern Art from the beginning of the twentieth century up until 1960, and features gems by Matisse, Picasso, Kandinsky and Miró.

On the fourth floor visitors will find contemporary works of art from 1960 to the present day, with a special focus on minimalist and conceptual art.

The Centre Pompidou building is one of the most extravagant in Paris thanks to the tubes, lifts, air ducts and brightly coloured escalators found on the exterior of the construction.

Its façade is so unique that we recommend visiting the museum even for those who are not fans of contemporary and modern art.

The building is situated in the quatorzième arrondissement (fourth district) of Paris. It is also home to other beautiful buildings like the Paris City Hall. 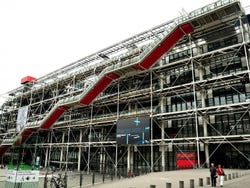 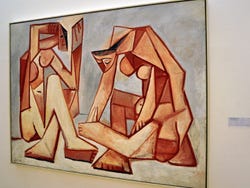 Picasso painting in the Centre Pompidou 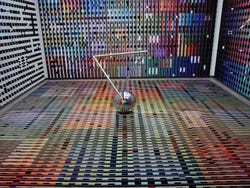 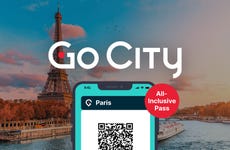