Opera Garnier in Paris is much more than the most famous theatre in the French capital. With this guided tour you'll also discover its artistic jewels. 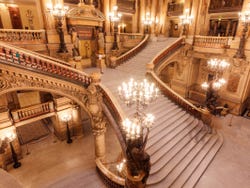 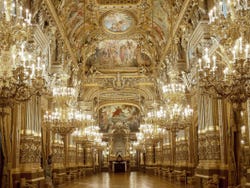 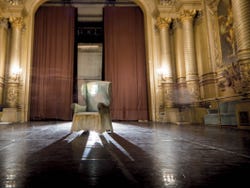 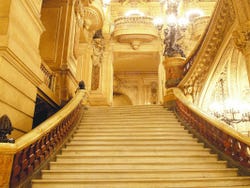 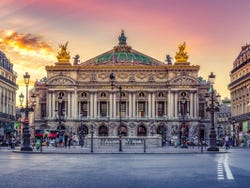 Inaugurate in 1875, the Opera Garnier is a symbol of Paris in the style of the Second French Empire - an artistic and architectural movement designed to embody the empire of Napoleon III.

Once inside the building, we'll visit the different boxes and even climb in the famous Grand Staircase. Many 'ball' dresses have a design specifically thought out to climb the stops of this majestic set of stairs.

During our tour of the lavish building, we'll see such stunning spaces as the “Rotonde des abonnés” - a large, circular hall surrounded by various columns and with a beautiful mosaic tiled floor. Do you know the secret behind its construction and use?

As the tour makes its way to the gallery, you'll see the wealth of sculptures and chandeliers whose value (both artistic and financial) is almost incalculable.

the tour then finishes back at the main entrance to the Opera Garnier.

English speaking guide specialised in the history of Paris.

Ticket to the Opera Garnier.

You can book up until 36 hours before the activity as long as there are still places. Book now to guarantee your spot.

Only some areas are accessible.

US$ 20.10
No hidden fees or surcharges
Free cancellation up to 48 hours before the service starts
Book

Free! Free cancellation up to 48 hours before the activity starts. If you cancel under this time or do not show up, you will not be refunded.

Excellent the guide that we got Opinion translated. Show original.

I travelled with teenagers
8