Explore the magnificent world-renowned Opera Garnier followed by a walking-tour through the historic Parisian Covered Passages. 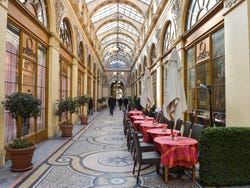 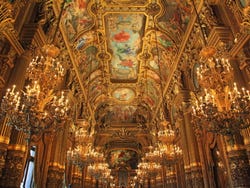 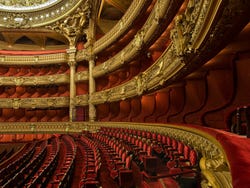 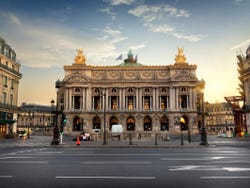 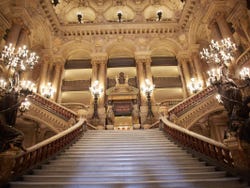 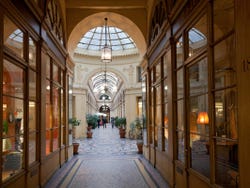 Set off on a 3-hour walking guided tour accompanied by a knowledgeable English-speaking guide who will lead you to the Palais-Royal. Here, you will set foot in the palace’s arcades, once residence of Cardinal Richelieu, chief minister of King Louis XIII during the seventeenth century. He is represented in numerous films including The Three Musketeers.

Saunter around the Colonnes de Buren located in the Cour d’Honneur, one of the inner courtyards of the “Palais-Cardinal” and discover the Jardin du Palais Royal, the palace's beautifully looked after garden. Continue your visit in the nineteenth-century Covered Passages of Paris, one of the first shopping arcades built in the city, including the renowned Galerie Choiseul and Galerie Vivienne. These richly decorated arcades are considered hidden gems, unknown to most tourists.

While you amble through Galerie Vivienne, the most famous gallery, admire the floor mosaics and the splendid window displays of high fashion boutiques, wine cellars, book shops and other traditional French stores in this practically secret shopping arcade.

The next stop will be the Palais Garnier, the majestic opera house in Paris, commissioned by the Emperor Napoleon III in 1875. Follow your guide through the most striking rooms, including the grand staircase, the impressive “Grand Foyer” and the concert hall, while you learn about the history and secrets of this architectural masterpiece.

Finally, head to the rooftops of the Galeries Lafayette for an incredible panoramic view of the City of Lights.

The tour includes an English speaking guide, but the tour can sometimes be carried out in two languages.

Admission to the Opera Garnier.

If there are still places available, you can book until the previous day (local time in Paris).

You will receive an email with your ticket attached which you must print out and show on the day of the activity.

No (not suitable for people with reduced mobility).

US$ 38.80
No hidden fees or surcharges
Free cancellation up to 3 days before
Book

I travelled with friends
Show all the reviews
like Free

9.30 / 10 407 reviews
Immerse yourself in "The City of Lights" with a guided tour around the French Capital, discovering the Louvre, the Siene and Notre Dame. What's more, it's FREE!
Free!
Book
like Skip the line

8.40 / 10 889 reviews
Explore the most-visited museum in the world with fast track entry and find out about its greatest artworks with a professional English-speaking guide.
US$ 65.50
Book
like

Paris Hop On Hop Off Bus

8.50 / 10 1,662 reviews
A Hop-On Hop-Off bus tour is one of the most comfortable and enjoyable ways of exploring Paris. Discover the city on the various lines and hop off and back on at any of its stops.
US$ 29.90
Book