Every weekend between April and October, the Palace of Versailles organizes a magnificent Musical Fountain Show (Grandes Eaux Musicales), arranged since 1666. It is the ideal way to finish a visit to the grandiose Royal Palace. 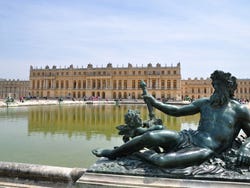 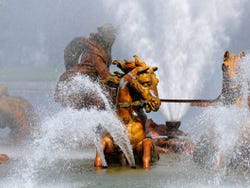 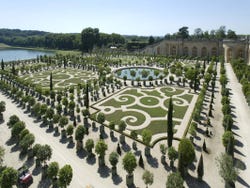 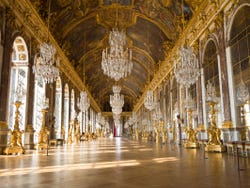 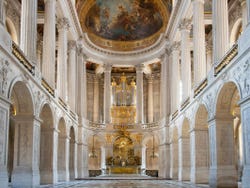 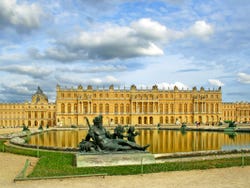 Departing from central Paris at 2pm, you’ll head to Versailles on a luxury air-conditioned coach. Versailles was once the capital of France during various years in the seventeenth, eighteenth and nineteenth century.

Skip the long queues with your fast track entry ticket and follow your guide into one of the most prominent royal palaces in the world. The English-speaking guide will take you through the various rooms of the residence, including the grandiose King’s Grand Apartment, the Queen’s Grand Apartment and the renowned Hall of Mirrors, where the Treaty of Versailles was signed in 1919, which ended World War I.

After visiting the Château, you’ll be lead to the wonderful gardens for the stunning Musical Fountain Show (Grandes Eaux Musicales).

You’ll watch as the Fountains come to life as the jets of water intertwine and blend to the rhythm of Baroque music and a show of lights. Providing water to these fountains was extremely challenging when Louis XIV began to expand the garden during his reign.

The coach will drop you off in central Paris at around 7pm.

The tour is exclusively in English.

Transportation to and from Paris on a luxury air conditioned coach.

Skip the line ticket to Palace of Versailles and its gardens.

Entry to the Musical Fountain Show.

If there are still places available, you can book until the previous day (local time in Paris).

You will receive an email with your ticket attached which you must print out and show on the day of the activity.

US$ 99.40
No hidden fees or surcharges
Free cancellation up to 3 days before
Book

This was mostly very good. Our guide Francois was very upbeat, friendly and knowledgeable on a very rainy day. She really did a great job. My only suggestions 1. Time should allow for a bathroom trip or snack at some point besides the arrival (although i realize Francois spent 10 minutes trying to find 2 people who left the group-not her fault 2. Paying an extra 30 p per person to see the water fountains/music was misleading and not worth it. (Again not the guide’s fault) overall good

I travelled with friends
Show all the reviews
like Free

9.30 / 10 407 reviews
Immerse yourself in "The City of Lights" with a guided tour around the French Capital, discovering the Louvre, the Siene and Notre Dame. What's more, it's FREE!
Free!
Book
like

8.80 / 10 1,192 reviews
Drifting down the Seine River on a panoramic river boat during the day or at night-time is an unforgettable experience and offers unparalleled views of Paris.
US$ 16.20
Book
like Skip the line

8.40 / 10 889 reviews
Explore the most-visited museum in the world with fast track entry and find out about its greatest artworks with a professional English-speaking guide.
US$ 72.30
Book