The history of Paris dates back to approximately 259 BC, with the Parisii, a Celtic tribe settled on the banks of the Seine. In 52 BC, the fishermen village was conquered by the Romans, founding a Gallo-Roman town called Lutetia.

The city changed its name to Paris during the fourth century. During this period, the city was threatened by Attila the Hun and his army, and according to the legend, the inhabitants of Paris resisted the attacks thanks to the providential intervention of Saint Geneviève (patron saint of the city).

In 508 the first king of the Franks, Clovis I, made Paris the capital of his empire. In 987, the Capetian dynasty came to power until 1328.

During the eleventh century, Paris gradually became more prosper thanks to its trade in silver and because it was a strategic route for pilgrims and traders.

At the beginning of the twelfth century, the first university in France was founded thanks to the uprisings of students and professors. Louis IX appointed the chaplain, Robert de Sorbon, to establish the College, which was later named after him, the Sorbonne.

Three insurrections took place during the fourteenth century in Paris: the first, in 1358, when Étienne Marcel led a merchant revolt. The second was a tax riot known as the Maillot uprising in 1382, and the third was the Cabochien revolt in 1413. These riots were part of the Hundred Years’ War.

Additionally, the capital of France, which was the most populated city in Europe in 1328, was struck by the Bubonic plague, killing thousands of Parisians. Following the Hundred Years’ War, Paris was devastated and Joan of Arc was unable to keep the British from taking Paris. In 1431, Henry VI of England was crowned King of France and the English did not leave until 1436.

The city kept on growing during the following centuries, although monarchs preferred to live in the Loire Valley. In 1528, King Francis I returned the royal residence to Paris and the city became the largest in Western Europe.

On 24 August, 1572, the royal council decided to assassinate the leaders of the Protestants (Hugonotes), which lead to Catholic mobs butchering protestants in Paris. Known as St. Bartholomew’s Day Massacre, it spread from Paris to the rest of the country during the following months.

Margaret of Valois, sister of King Charles IX, married Henri of Navarre (Head of the Huguenots dynasty) that same year, while Henry III tried to find a solution to the conflicts between the Catholics and Protestants. However, in 1588, the French Catholics forced Henry III to flee on the so-called Day of the Barricades and killed him a year later. He was succeeded by Henry of Navarre, becoming King Henry IV. A decade later, Henry IV decided to convert to Catholicism and was crowned King of France in 1594.

In 1648, the second Day of the Barricades took place when the Parisians opposed the King due to the deplorable level of poverty. This was the beginning of a long uprising called the Fronde parlementaire, a serie of civil wars that took place in France between 1648 and 1662. Fifteen years later, King Louis XVI moved the royal residence to Versailles.

The decline of the Monarchy

As a consequence of the Fronde, poverty spread throughout Paris. During this period, there was an explosion of the Enlightenment philosophical movement, whose principles are based on reason, equality and freedom.

Philosophers and authors such as Voltaire, Rousseau, Diderot and Montesquieu fostered the Enlightenment, creating a need for a socio-economic equality that led to the revolution and the decline of the divine right monarchy.

On the 14 July 1789, the Parisians stormed the Bastille, symbol of the royal authority and on the 3 September 1791, the first written Constitution was created and approved by King Louis XVI. The King and ministers made up the executive branch and the Monarch was allowed a suspensive veto of the laws approved by the National Assembly.

On 10 August, 1792, the Parisians attacked the Tuileries Palace and the National Assembly suspended the King’s constitutional rights. The new parliament abolished the monarchy and proclaimed the Republic. As a consequence, on 17 August 1795, a new constitution was approved giving the executive power to a Directory.

The new Constitution was not accepted by monarchic groups and Jacobins. Several uprisings took place in Paris, but were all repressed by the army.

Nevertheless, on 9 November 1799, the army was unable to crush the coup d’état led by Napoleon Bonaparte, which overthrew the Directory and replaced it by the Consulate, Napoleon being First Consul.

The Napoleonic Wars – and with it the Empire of Napoleon – ended on 20 November 1815, after Napoleon had been defeated at the Battle of Waterloo, and the second Treaty of Paris of 1815 was signed.

During this period and with Baron Haussmann as the prefect of Paris, the city changed its urban structure, rebuilding the center, knocking down its fortification and expanding the metropolitan territory.

On the 28 January 1871, Paris was conquered by the Prussian troops and a few years later (at the end of 1800), the Third Republic was proclaimed. With the new government, an era of economic growth began for the city, promoting in 1889 the construction of the Eiffel Tower, worldwide symbol of Paris.

From the twentieth century on, Paris suffered important changes with the reconstruction of different neighborhoods, many damaged during World War I and World War II.

During World War I, the city resisted the German offensives. However, in 1940, Paris was occupied by the Nazis, although the Parisians resisted and freed the capital on 25 August 1944.

During the war against Algeria, several violent manifestations took place in Paris against the war, with numerous attacks by the OAS (Organisation of the Secret Army).

During the months of May and June 1968, a series of protests took place in the capital of France, known as “May 68”. This was the largest student protest in the history of France and, possibly, the rest of Western Europe.

One of the last riots to take place in Paris was in March 2006, when students poured out onto the streets and protested against the labour market reform.

In November 2015, Paris witnessed a tragic event, several terrorist attacks hit the city and the suburbs of Saint-Denis, killing 137 people and injuring 415. 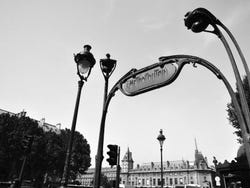 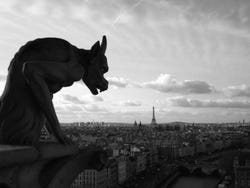 Views of the center of Paris from Notre Dame 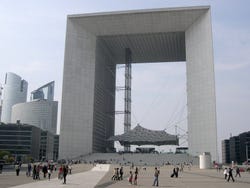 The Arche of the Défense
3See photo gallery