Discover what happened in the Notre Dame fire, explore the interior of its "little sister" and tour the Ile de la Cité, the oldest part of Paris. 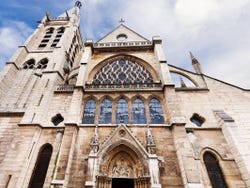 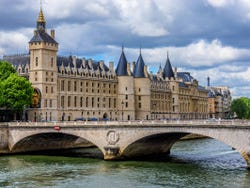 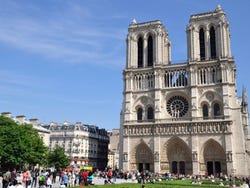 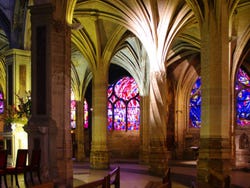 The tour meets on the far bank of the Seine river, from where we'll see one of the most famous and most storied cathedrals in the world. And despite the recent fire, Notre Dame still represents one of the most beautiful examples of Gothic architecture.

Outside the cathedral itself, your guide will explain what happened that fateful afternoon of the 15th of April, and how the fire began in the roof, destroying the spire and causing severe damage to the interior. And you'll learn what the Parisian firemen did to preserve the cathedral's jewels as well as possible, with audiovisual aids from our guide.

Once we've spoken about the destruction, it's time to learn about the reconstruction of Notre Dame, what the process will be, and how they're sorting through the hundreds of proposals being sent from architects around the world.

Next we'll take a guided tour of the Ile de la Cité, as we discover the history of this little island in the Seine - the location where the medieval Paris was founded, and admire some of its most emblematic buildings, including Sainte Chapelle or the Conciergerie.

Finally, we'll head to the Latin Quarter to admire one of the best examples of gothic architecture in Paris, the church of Saint Séverin, known as "Notre Dame's little sister" - a smaller but equally beautiful and imposing structure. We'll head inside to marvel at its architecture, stained glass windows and artworks.

The tour then ends just outside the church.

When reserving this tour, you will contribute €1 for the reconstruction of the Notre Dame Cathedral. This is included in the price.

This guided tour does not include access to the Notre Dame Cathedral, as it's closed to the public following the fire on the 15th April 2019.

All of our providers comply with local legislation and applicable health recommendations to avoid the spread of Covid-19.

The activity takes place with a guide that speaks in English.

Guided tour of the Ile de la Cité and the church of Saint Séverin.

You can book up until 4 hours before the activity as long as there are still places. Book now to guarantee your spot.

US$ 17.40
No hidden fees or surcharges
Free cancellation up to 24 hours before the service starts
Book

Free! Free cancellation up to 24 hours before the activity starts. If you cancel under this time or do not show up, you will not be refunded.

Our tour guide had deep knowledge of the history of Notre-Dame and France. She was engaging and adequately responded to all our questions. I highly recommend the tour.

Thank you very much to Marine who did our tour a memorable one. Very passionate and knowledge! You will definitively not regret of choosing Marine! She is so helpful and nice! Highly recommend ! Ask for Marine! Many thanks

We have learned a lot this morning. Many thanks Opinion translated. Show original.

I travelled with my partner
Show all the reviews
like

9.20 / 10 321 reviews
Immerse yourself in "The City of Lights" with a guided tour around the French Capital, discovering the Louvre, the Siene and Notre Dame. What's more, it's FREE!
Free!
Book
like

9.10 / 10 57 reviews
Take a free tour through the narrow streets of the most cultural and artistic of Paris' districts, where Picasso and Van Gogh sought out inspiration.
Free!
Book
like

8.70 / 10 1,520 reviews
Drifting down the Seine River on a panoramic river boat during the day or at night-time is an unforgettable experience and offers unparalleled views of Paris.
US$ 17.40
Book