A royal medieval palace turned into a prison during the French Revolution: discover the history of the Conciergerie with this skip-the-line ticket. 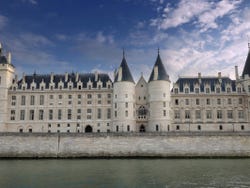 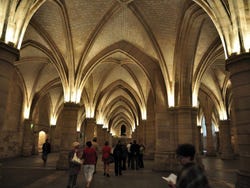 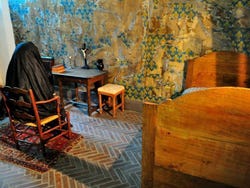 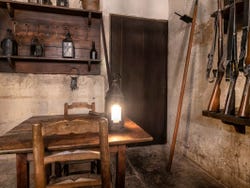 "Excuse me, sir, I did not mean to do it". Legend has it that those were Marie Antoinette's last words before being executed one cold morning in October 1793. The famous last queen of France ended her days in the cells of the Conciergerie, which had been transformed from a medieval palace to a prison in the turbulent years of the French Revolution.

With your skip-the-line ticket to the Conciergerie, you'll be able to explore the incredible rooms in this gothic palace located on the Île de la Cité, in the heart of Paris. One of the stand-out features is the clock tower, which is where the first public clock in Paris was installed.

Underneath the palace, you can delve into the prison cells, where you can see the harsh conditions that prisoners were subjected to during the French Revolution. One of these cells is more famous than the others, as it was where prisoner number 280, Marie Antoinette, spend her final days. Here you can see personal items that belonged to the monarch and learn more about her fall from royalty. Do you think it's true that upon learning that the French peasants didn't have bread to feed themselves, she replied by saying "let them eat cake"?

The Conciergerie is currently home to the French Palace of Justice, and some of its rooms and facilities can also be visited with this skip-the-line ticket.

With this ticket, you'll be given a free informational leaflet in English and other languages. Guided tours are also available free of charge, but only in French. The tours last about an hour and the timetable varies depending on the day. If you are interested in taking a guided tour in French, check with staff at the Conciergerie.

When you purchase this ticket, you'll be able to visit the monument without standing in line at the ticket office. However, you will still have to queue to enter the palace and you'll have to wait to go through the security controls.

Combined Visit with the Saint-Chapelle

All of our providers comply with local legislation and applicable health recommendations regarding protective material and safety to help avoid the spread of Covid-19.

Ticket to the Conciergerie

Skip the line ticket to the Conciergerie.

You can book up until the previous day (12:00 pm) if there are still places available. Book as soon as possible to guarantee availability.

No, not suitable for people with reduced mobility.

Very good, but it is not very worth visiting, really. There is nothing and to see 4 cells or where Marie Antoinette was, it will only be valid for lovers of these stories Opinion translated. Show original.

I travelled with teenagers
8

To make the visit well you must take the audio guide separately. Opinion translated. Show original.

10 / 10 1 review
This guided tour of the Eiffel tower is one of the best ways to discover its secrets and enjoy some spectacular views of Paris. Get to know the symbol of the 'City of Light'.
US$ 43.60
Book
like

7.30 / 10 12 reviews
Let the glamour of the French CanCan seduce you as you enjoy the most Parisian of the grands cabarets, in the heart of the Latin Quarter of Paris. An unmissable event!
US$ 96.90
Book
like

9.70 / 10 52 reviews
Take our fantastic tour of Pere Lachaise Cemetary, the resting place for many notable figures from the past, such as Oscar Wilde and Edith Piaf.
US$ 21.80
Book