Situated close to the center of Paris, Château de Vincennes is one of France's magnificent medieval treasures. Discover its fascinating history when you buy this fast track ticket. 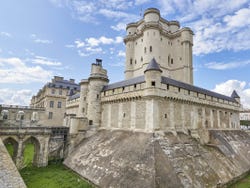 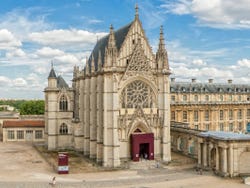 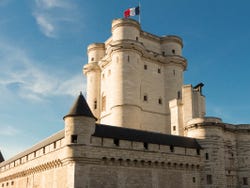 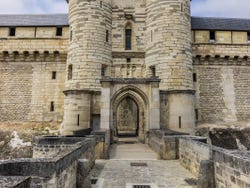 With this fast track ticket, you will have direct access to the three monuments that make up the Chateau de Vincennes site: the Castle, the Keep, and the Sainte-Chapelle de Vincennes chapel.

Considered one of the largest medieval castles in Europe, the Vincennes fortress was built between the 14th and 17th centuries. Although it began life as a hunting lodge, the building was expanded over the decades and even hosted the weddings of kings Philip III and Philip IV.

This ticket to Chateau de Vincennes will allow you to explore its beautiful halls and rooms. Particularly outstanding is the personal office of Charles V, which houses the library and study room of the French monarch.

This Keep is the castle's main watchtower. Besides guarding the main fortress, the tower also served as protect the most valuable food and objects.

From the top of the Keep, you will also enjoy fantastic views of the whole of the complex of Vincennes.

This 14th-century chapel founded at the order of the French king Charles V is considered a masterpiece of Flamboyant Gothic architecture. Its intricate polychrome stained-glass windows mean the temple is cast in a very special light which astounds visitors when they first step inside.

Important: due to the implementation of the exposition on Henri III, access to this chapel is currently not possible.

The monumental site of Vincennes is open from every day of the week, at the following times:

Chateau and The Keep

Last access is 45 minutes before closing time. On the 24th and 31st of December, the entire site closes at 4 pm.

The visit to the interior of the castle and to Sainte-Chapelle is self-guided, following an itinerary described in an English and multilingual brochure.

Inside the castle is the personal office of King Charles V of France. The tour of this room takes place with a tablet device that shows various augmented reality videos in English and other languages.

The Keep is accessed via a guided tour. The schedule for this tour will be shown at the castle's ticket office on the day of your visit to the complex.

By reserving this ticket, you will avoid the queues that usually form at the ticket offices of Chateau de Vincennes. However, you will still have to queue to access the monument and security checks may take a few minutes.

Please check local restrictions before traveling. All of our services comply with recommendations to avoid the spread of Covid-19.

Direct access to the castle, the keep, and the chapel.

Multilingual information brochure for the self guided tour or the castle and the chapel.

Tablet with multilingual videos for the self guided tour of the personal office of Charles V.

Guided tour of the Keep.

You can book up until the same day (4:00 pm) if there are still places available. Book now to guarantee your spot.

9 / 10 415 reviews
Immerse yourself in "The City of Lights" with a guided tour around the French Capital, discovering the Louvre, the Siene and Notre Dame. What's more, it's FREE!
Free!
Book
like

9.20 / 10 91 reviews
Take a free tour through the narrow streets of the most cultural and artistic of Paris' districts, where Picasso and Van Gogh sought out inspiration.
Free!
Book
like

9.30 / 10 14 reviews
Visit Mont Saint Michel: a UNESCO World Heritage site, place of pilgrimage and one of France’s most popular and emblematic landmarks.
US$ 170.40
Book